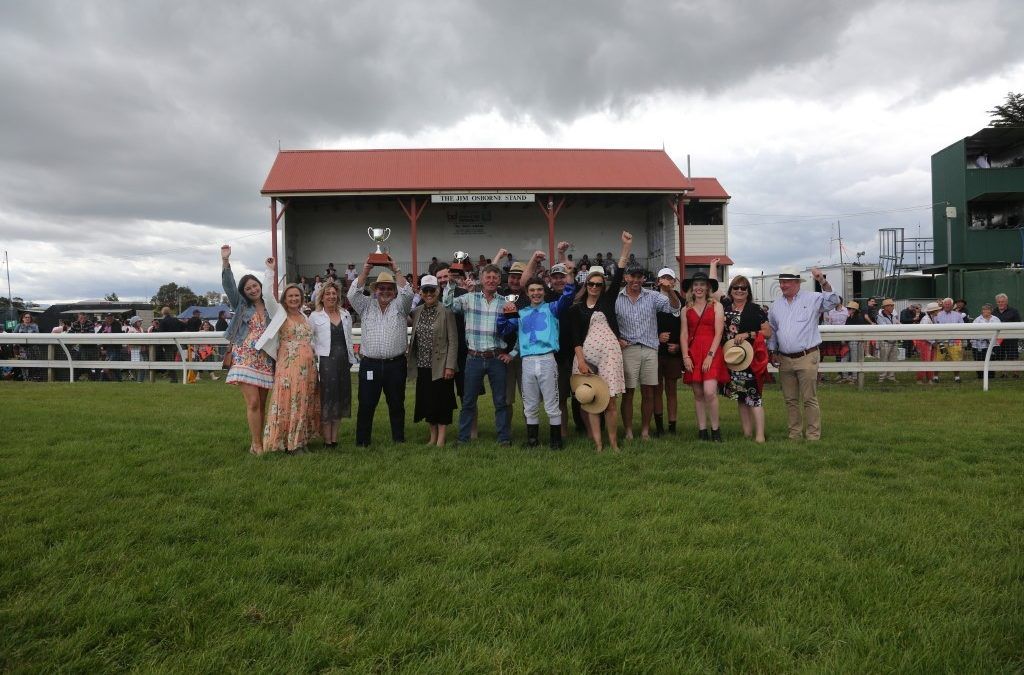 Everyone loves a grey, even more so when it’s locally trained and ridden grey mare Glass Warrior hitting the line first in the time honored Longford Cup on New Years Day.

The crowd erupted as the heavily supported topweight surged to the lead on straightening, and with the result never in doubt, it allowed star apprentice Kyle Maskiell and local legend –  trainer John Blacker time to savor the victory in front of family and friends as she ran out a comfortable winner with White Hawk winding up strongly once clear to grab second, giving Motree Thoroughbreds the quinella and a day to remember.

The win may have meant even more to Rob Hammond, who manages the ownership group that lease Glass Warrior from Motree Thoroughbreds.

Rob, who has held a passion for horses all his life, has been battling serious health issues of late and described the win as just the tonic he needed heading into 2021.

Glass Warrior is the third horse he has leased from Motree Thoroughbreds and whilst the other two were winners, the Launceston Guineas (LR) winner and Hobart Cup (G3) placed mare is certainly the star of the trio.

Ever on the lookout for a nice grey, Rob spotted the daughter Glass Harmonium (IRE) in a paddock out at Motree after she was deemed too unfashionable for selection in that years Tasmanian MM yearling sales.

Rob put a group together including good friends from Scottsdale and the surrounding areas along with David and Kath Anderson on Flinders Island.

Mandy credits Rob with “really saving her bacon” that year following an unsuccessful foray to the sales and plenty of stock left at home that needed to go into work.

The story does however go much further back than that when a chance conversation following Banca Mo’s Warnambool Cup win led to Mandy sourcing the mares dam Hissy Miss for just $2,000 along with a free service to Ustinov (resultant foal being the progressive Banca Nip).

At the Cup presentation Mandy was chatting to the owner of dual Warnambool Cup winner “Hissing Sid” who informed her of the staying prowess of the Golden Snake (USA) progeny the rest as they say is history.

With the help of Rob and his group, Mandy has been able to stick true to her policy of breeding horses that will win races, not just because they are fashionable and with the winners flowing and the sales just around the corner the results are there for all to see.