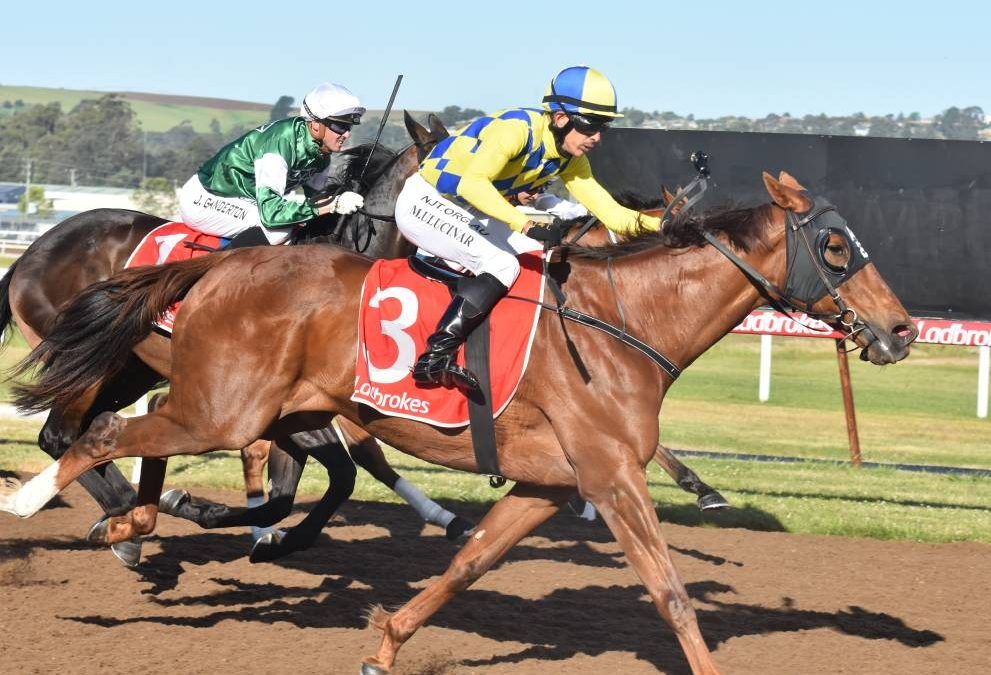 When grand old warhorse White Hawk overhauled his rivals in the shadows of the post to claim Fridays feature Ladbrokes Golden Mile  at Devonport it capped off an amazing 72 hours for Motree Thoroughbreds.

Coming off the back of a Motree bred double on the mainland a week prior,  the team had plenty of reason to be excited for what lay ahead, however not even the most optimistic of us could not have foreseen what was to come.

The show started at 8.30pm on Wednesday Night with the running of the Listed Newmarket Hcp which attracted the best field of sprinters seen in Tasmania for many years.

Motree Bred gallopers First Accused and Mandela Effect both hit the line hard to finish 3rd and 6th respectively, with Deroche proving to speedy over the 1200m to score a well deserved victory.

It was a pleasing result all round with Jubilance – a half sister to Deroche a current member of the Motree Thoroughbred Broodmare Band.

Next up it was Weldborough who relished the drop back to 1400m to take out the revered Craig Hanson Memorial for the Leanne Gaffney team.

Spirits were already high as the field lined up for the following race where the addition of blinkers and a change in tactics saw Mariposa bounce back to her best to score an upset all the way victory for John Blacker at the juicy odds of 26/1.

It was a great result for the ownership group many of whom are also in last years Launceston Cup winner Glass Warrior who had turned in a pleasing first up performance at Hobart the weekend before.

With only a day to recover, we were back to Devonport on Friday which had attracted quality fields throughout the day.

The Leanne Gaffney team again got the ball rolling with Artuso who jumped one of the outsiders of the field appeared to relish a brief freshen up to turn in a career peak performance when proving too strong for a classy field in the 1150m BM68.

It was win number seven on the tapeta for the son of Tough Speed who has become a great money spinner for connections.

And so we came to the days feature – The Ladbrokes Golden Mile which is considered a key lead up to next months Devonport Cup.

Rated a wide open affair by many good judges it was humbling to have four of the ten runners engaged carrying the Motree Brand.

Banca Nip, Upwind & Vallabar were all considered strong chances by the market however it was the forgotten hero White Hawk, returning as much as 100/1 in places who reminded everyone of his class when scoring another feature win to sit alongside last years Summer Cup and Launceston Cup placing.

Aided by a great ride from Mehmet Ulucinar who followed instructions to the letter this special win was a fairytale ending to what was a memorable 72 hours for our Motree Family.

And for those who are wondering – a single dollar all up on the four horses at starting price would have netted you a healthy $113,399 – unfortunately in hindsight this writer was not optimistic enough.