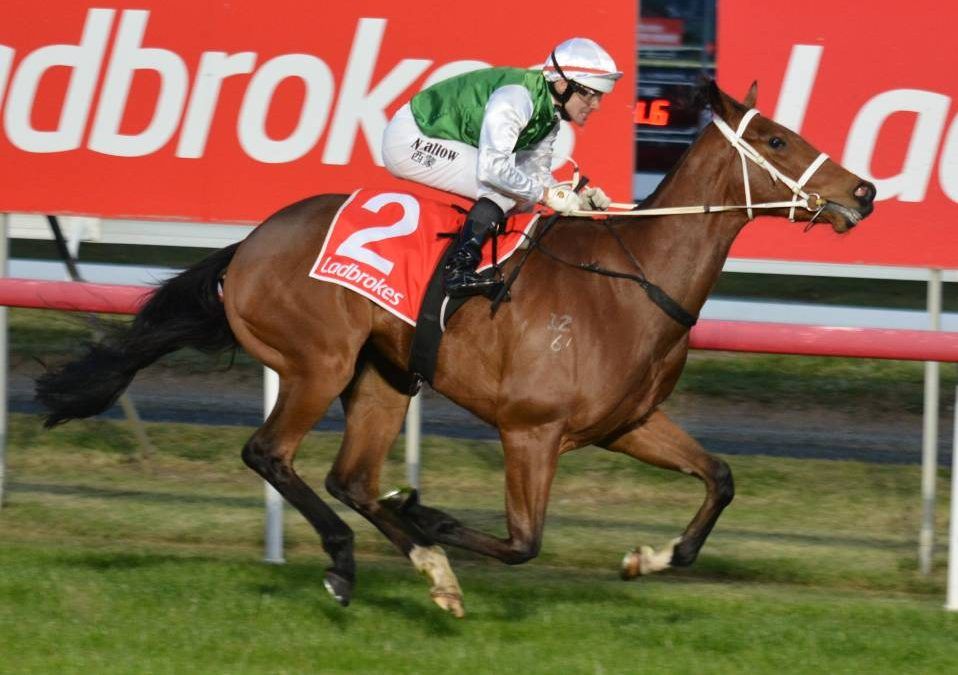 IMPRESSIVE: Galenus, ridden by Noel Callow, wins at Mowbray on Saturday night after an early race scare when his saddle slipped.

Promising youngster Galenus made amends for the bad luck experienced by his half brother Mandela Effect earlier in the day with an easy first-up win at Mowbray on Saturday night.

But it wasn’t all smooth sailing, as jockey Noel Callow revealed that he’d had a bit of a scare just after the start of the 3YO Maiden (1100m).

“He jumped a bit awkwardly and the saddle slipped back,” Callow said. “He put in a bump for a couple of strides and I thought ‘this could be interesting’ but luckily it didn’t go back any further.

“Without that incident he would have won pretty much untouched. He’s a nice horse.”

Despite tending to over-race, Galenus ($2.15 to $1.35) charged clear in the straight to beat stablemate and pacemaker Heavenly Light by almost two lengths.

A few hours earlier, Mandela Effect ran in the $175,000 Weekend Hussler at Caulfield but got caught behind the leader and never got out.

He went to the line untested in fifth place, beaten only 1-1/4 lengths.

Galenus was the second heavily-backed winner in the first three races. The well-named Trumpcash shortened from $15 to $3.70 before winning the 1400m maiden in a three-way photo-finish.

Trainer Brendan McShane said the lightly-raced four-year-old was almost 17 hands and from a family of late-maturers so his owners had to be patient.

“It’s been their dream to breed themselves a cups horse and this is certainly a step in the right direction,” McShane said.

“We’ve always known the ability was there and he’s been backed a few times but (in the past) we’ve never seen him finishing anything off.

“But his recent trial win at Longford was a good sign – he was very strong and resolute.”

Favourite-backers didn’t make a good start to the first meeting back on grass, with the heavily-backed Sellick ($5.50 to $2.25) getting run down in the opening race.

Bulent Muhcu rode the first-starter confidently but he was left a sitting shot in the closing stages and was overhauled by John Luttrell-trained stablemates Set Play and Real Acclaim.

Stable foreman Nicole Luttrell said first-starter Set Play ($14 to $41) had worked and trialled well but she was worried that he might need race experience.

Jockey Craig Newitt labelled Kwai a likely contender for this season’s feature mares’ races after her first-up win in the Benchmark 66 Handicap (1100m).

“She’s always been promising and she’s started to settle down now so I think she can push onto the better mares’ races,” Newitt said.

Kwai settled third behind the flying Gee Gee Queen Bee and, although pocketed until the top of the straight, Newitt said he wasn’t concerned.

“I thought the leader would kick on the corner so I just had to wait for the gap to open up,” he said.

“She was always travelling like a winner and it was pretty soft in the end.”

Kwai is one of numerous former Barry Campbell-trained horses now in the Leanne Gaffney stable.